Honors College
Purdue University is taking steps to ensure the health and safety of our community. For the latest information and guidance on Purdue’s response to COVID-19 please visit: https://protect.purdue.edu/

Tyler Trent inspired the nation throughout his courageous battle with cancer. In his honor, donors to Purdue University have established the Tyler Trent Courage and Resilience Award. This scholarship will be awarded to undergraduate students at Purdue’s West Lafayette campus who have encountered serious physical or similarly daunting adversity in their pursuit of higher education. 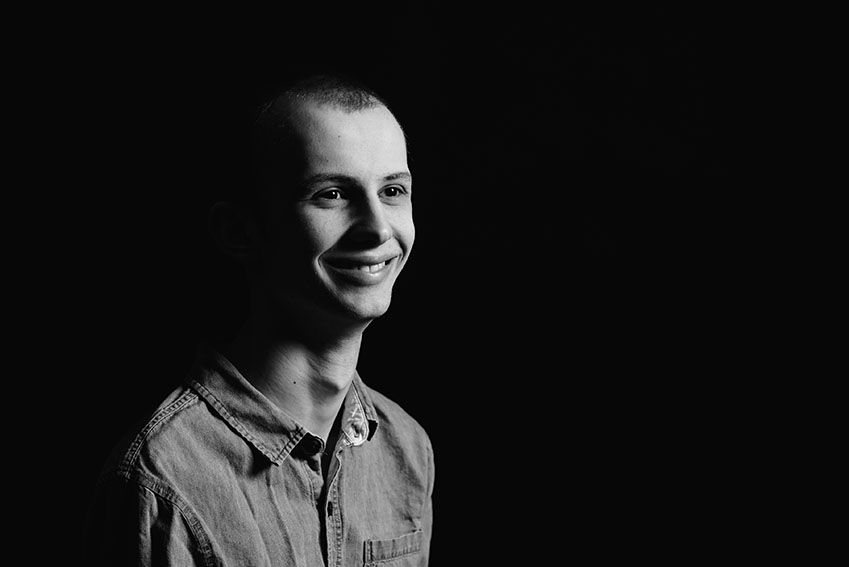 Tyler Robert Trent was born on September 7, 1998, and sadly passed from this earth due to osteosarcoma bone cancer on January 1, 2019. He was 20 years old. Tyler was known as an American cancer activist who attended Purdue University. He was diagnosed with osteosarcoma for the first time as a 15-year-old in 2014. He won the 2018 Disney Wide World of Sports Spirit Award as well as the 2018 Sagamore of the Wabash award, and his book, The Upset, with a foreword written by Scott Van Pelt and endorsed by icons in the sports world and other prominent leaders, becomes available in March 2019. 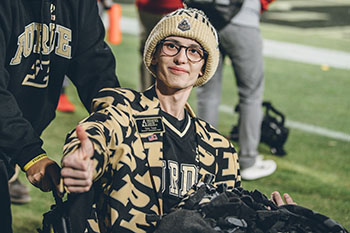 Tyler maintained a strong relationship with the Purdue football team and served as the honorary captain in both the 2017 and the 2018 Hammer Down Cancer games. He also served as honorary captain for the Music City Bowl game in Nashville, where Purdue played Auburn on December 28, 2018. He drew national attention with his College Game Day piece on ESPN with Tom Rinaldi. He predicted Purdue would beat #2-ranked Ohio State and they did, 49-20. He even received shoutouts and phone calls from Vice President Mike Pence and Drew Brees. He went on to raise over a million dollars for cancer research.

Tyler was an unlikely sports hero – a scrawny kid with a shy grin that dreamed of becoming a national sportswriter and statistician. He broke through the cluttered world of social media, inspiring a flood of support nationwide and demonstrating his passion for life, his passion for Purdue, and his passion to do whatever he could to raise awareness and money for cancer research, even in the midst of the crazy, horrible journey that he had been on. He just wanted to help people. He was a genuine, faith-filled Christ-centered human being. There are several words that would describe Tyler: faithful, driven, determined, hardworking, self-sufficient, efficient, leader, magnetic, compassionate, helpful, others-oriented, brought people together, motivated and curious. These are a few that rise to the top of the list.

Tyler also volunteered with the Purdue Dance Marathon and served on the leadership team, which raises money for Riley and the Purdue Center for Cancer Research, where he was the first student to ever sit on the board. He donated the tissue of his tumor for research, one of the first patients to do so at Riley Children’s Hospital. 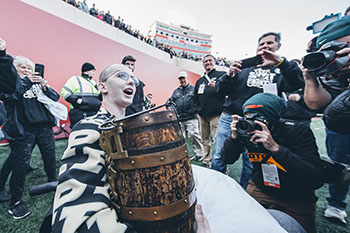 He also got the honor to name the tissue TT1 and TT2. Tyler’s heart was to do all he could for the entities and people and causes that were very personal and important to him. He was selfless in this position, not easy with the condition his health was in, but his spirit was always strong and fighting.

Tyler represented a son, brother, friend, nephew, cousin, grandson, activist and Boilermaker, among other things. When he was faced with the greatest adversity of his life, he leaned in, he never faltered. In his weakest moments he showed unimaginable strength. Tyler gave of himself, inspired others, faced long odds without fear knowing there is no failure if you give all you have. He inspired many with his faith in Christ, fearlessness and his fight.

It is said a Boilermaker will fight until there is no fight. While that’s not quite true, Tyler’s fight is over, but he will remain a Boilermaker forever.

Any undergraduate student enrolled at Purdue University-West Lafayette is eligible to apply and receive the award. Students may nominate themselves and faculty or staff are also encouraged to nominate candidates. The number of recipients and award amounts will vary. The Purdue University President will select the recipients of the Tyler Trent Courage and Resilience Award.

The 2021 application period for the Tyler Trent Courage and Resilience Award is now closed.