WEST LAFAYETTE, Ind.— Honors College student Peter Boyd received quite a surprise during his Monday STAT 59800 class, as he was presented with the prestigious 2017 G.A. Ross Award.  Named for a 1916 alumnus, the honor recognizes a graduating senior who demonstrates high standards of academic achievement, outstanding leadership, strength of character and contribution to Purdue. It is awarded annually to Purdue’s outstanding graduating senior man. 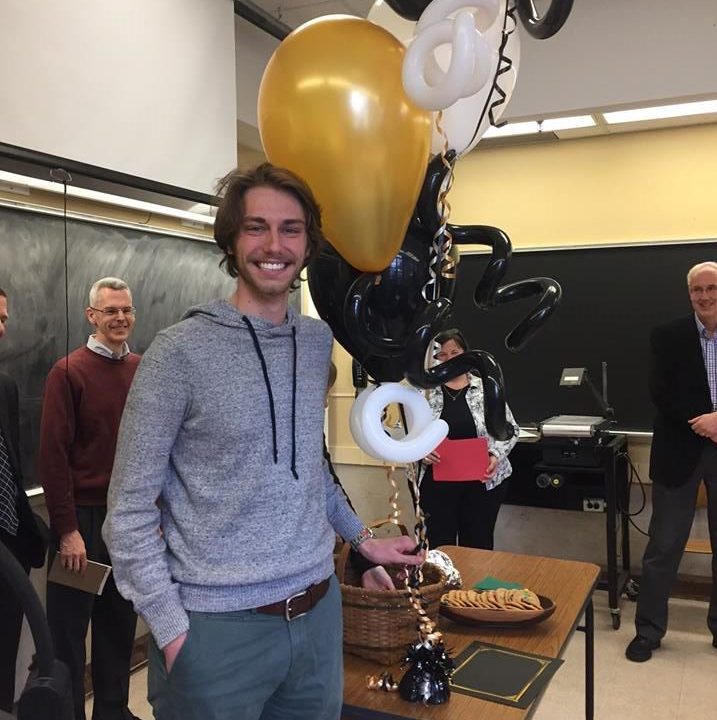 “Peter is not only an exceptional student, but a widely respected member of our Honors College community,” said Sashaun Wood, student engagement director for Purdue Honors College.  “His humility and compassionate heart are what make him an instrumental leader at Purdue and a deserving recipient of this award.”

The Saint John, Indiana native is studying applied statistics, actuarial science, mathematical statistics and mathematical statistics with a math emphasis in the College of Science.  He will graduate this May with a minor in management.  As this year’s G.A. Ross Award recipient, Boyd will receive $2,000, a medallion and his name engraved on the tower on Engineering Mall.

“There are a ton of really outstanding seniors at Purdue, so to be chosen among others really speaks a lot to the support I’ve been given over the years,” Boyd said.  “I received the award because I had tremendous people in statistics, honors and across the university, who were working hard to ensure that I had every opportunity to succeed.”

Academic advisor Susan Young with the College of Science nominated Boyd for the G. A. Ross Award and says her appreciation for Boyd has grown with each year he spent at Purdue.

“Throughout his four undergraduate years, Peter has been committed to serving the campus, to helping other students develop their academic and leadership abilities, and to excellence in academics and research,” Young added.  “He has taken on an amazing variety of responsibilities, many of which utilize his outstanding ability in math and statistics.”

Boyd is a Stamps Scholar, member of the Honors College’s Honors Leadership Council, involved in Mortar Board, Purdue Student Goverment, SOGA and the Honors Mentor Program, among other things.

“I think that leadership can be captured by one’s ability to foster leadership growth in others,” Boyd explained.  “Our titles are temporary but the position will persist; it is our responsibility to do whatever we can to inspire and build up those around us.”

While Boyd’s schedule is certainly packed, he says his high level of campus and community involvement has kept him on track academically.

“I think I would have driven myself crazy studying,” he added.  “Having fun things to do with great friends kept me happy and positive.”

“With a passion for life-long learning, Peter is highly motivated to always stretch himself and to make the most out of each opportunity,” Young said.  “He is an initiator and has an enthusiastic, can do attitude.”

Boyd will be recognized as the G.A. Ross Award winner at the May commencement.